This past weekend, my wife, her cousin and I went out fabric shopping. Last year they all made medieval dresses and now they want me to get into the cosplay spirit. Ideally, I would have a science fiction outfit. Maybe a command officer uniform from Star Trek: The Next Generation, or a Ranger outfit from Babylon 5? Apparently that doesn’t fit with all the fantasy focused events they want to go to this year and next, so I need something that’ll fit in and I can’t be like Sheldon from the Big Bang Theory.

When they asked me if I wanted to wear a fantasy outfit, my initial reaction was less than positive. I didn’t really like the idea of dressing up like a knight or anything. I had considered asking for a wizard costume more than once, but I’ve never seen any inspiration that would fit with something I’d be willing to wear in public and still be recognizably a wizard. So Annie and her cousin showed me various options that I could consider.

I’m a big guy. I have quite the gut going on, stand over six feet tall, and apparently have very broad shoulders. I don’t really like attracting attention to myself. But I try to balance my anxiety and low physical self-esteem with my want to not always be a stick in the mud, so when I was told that I could have any medieval style costume, I finally came up with what I wanted to be: a viking! 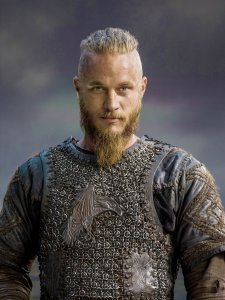 I showed my wife images of Ragnar Lothbrok from the Vikings TV show, and she almost fell off her seat. Here was a man wearing chain mail and leather, two things that neither Annie or her cousin could work with, at least efficiently. They balked at my idea and wanted me to settle for something more realistic.

As we walked around the fabric stores, I picked out things that were dismissed as boring. I considered the kind of Viking style outfit I’d like to wear that they’d be able to sew together for me and later in the day, I was actually able to make a good fabric selection. Annie’s cousin seemed surprised that I was able to find something workable. I might not have much fashion sense, but everyone is lucky sometimes. I paired a really nice black fabric with an interesting print on it with a blue-grey fabric with a simple texture to it.

I really like the idea of getting together a Viking style costume, and while I know that I don’t have the physique, I’m hoping that it’ll all come together and look fairly nice on me when it is done. Finding the right fabrics has made me a bit more excited about it all, and I’m starting to look into how to make a cosplay style Viking ax, shield and bracers. Maybe this won’t be so bad after all?