The middle class has long been the standard to which most of the world’s population has strived for. The idea that we will be able to live a comfortable life and have enough left over to purchase the odd object of desire or go on a reasonable vacation. I have been in the work force for over a decade now, and while I’ve gotten glimpses of this life, I haven’t been able to achieve it yet.

While in Virginia visiting my co-workers on the Christmas retreat that rocketgenius paid for, I was able to talk to one of our developers about the middle class problem as I see it. He discussed things from the view of a successful, hard working entrepreneur with a day job and a personal endeavour on the side. He was pro capitalism, as many Americans are, despite what it has done to their economy.

On the other hand, I was not a fan of the idea that unfettered capitalism is the best system. I have been reading the news, and have seen some moves in other countries that seem like common sense to me. Things that could make their economy strong through empowering the middle class.

Why is the middle class important?
The people at the edges of the income brackets don’t contribute to the government the same way as those in the middle.

People in the lower income side of the scale can afford very little. The amount of taxes they pay are reflected in their lower earnings. They are usually an overall drain on the country resources due to their need to utilize programs and systems to supplement their basic needs.

People earning high amounts of money are able to utilize the strength of their income to hide, remove or otherwise stop themselves from being taxed at the high rate that the government originally expected. There are these loopholes in hopes that they’ll take their earnings and spend them on charities, creating jobs and otherwise benefiting society. Most true capitalists are hiding as much money from the government as possible so that they pay little taxes.

It ends up being the middle class that pays the most in taxes when you compare the ration of dollars earned versus taxes paid. They don’t have the resources to hide their money from the government using tricks and loopholes, and they earn enough that they don’t “need” to qualify for many government services.

With a strong middle class of tax paying citizens, this means the government has money to spend on roads, healthcare, police and fire services, and more. If the pool of taxable income continues to drop, how can we expect a government to run efficiently and without accruing massive amounts of debt?

From a more personal side, having a strong middle class means better options and opportunities for education. The middle class also helps create new companies and new jobs through their entrepreneurial efforts.

Did you know that only one percent of new companies are started by people considered to be extremely poor or extremely rich? 1

Isn’t this the same as it has always been?
Actually, since the 1960’s, the income gap has been widening. The average CEO in the 1960’s only made between twelve and thirty times the average worker. Today, that has swung to the point where they are making between one hundred and four hundred times an average workers wage.

This means that today, a CEO can expect to earn more in a day than their average employee earns in a year. Without using fairness as a measure, does that make financial sense if the middle class are the biggest value to the taxable income of a country?

Another interesting example is that the CEO of JC Penny earns 1,795 times the average JC Penny worker wage. 4 The head of the company received fifty three million dollars ($53,000,000) in pay and benefits while workers earned only about thirty thousand ($30,000) per year.

Want to see more CEO pay ratios? Bloomberg has you covered with their interactive chart. 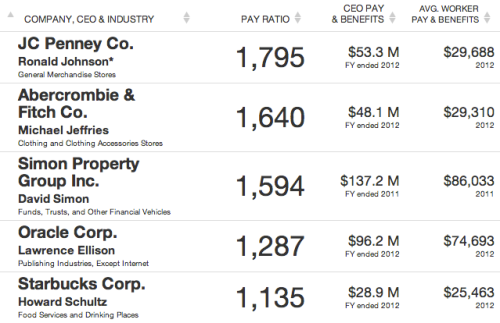 At the end of the day, it leaves me wondering how CEO’s can value themselves so high, and their workers so low. Do they have some special ability we don’t know about?

Can’t we just bump up minimum wage?
There are a few factors to consider here that makes bumping up the minimum wage less than ideal. The first issue is inflation. If you increase minimum wage, you have an effect on inflation. If a store owner has to pay their employees more, they’ll want to find ways to pass on that cost to consumers, either through increasing product/service costs or reductions in size/durability/value.

The second issue is that this doesn’t really strengthen the middle class. Minimum wage really sets what I consider to be the bottom run of income. It is supposed to be a wage where if someone works their forty hours per week that they could afford a roof over their head, food in their belly, and clothes on their back. It isn’t supposed to be a wage that can build houses, buy cars, or invest in businesses.

What happened to one person needing to work, one person taking care of the family and the kids enjoying their childhood?

What do you think should be done?
Well, Sweden is doing some interesting things. They were looking at both a minimum guaranteed income and a maximum income ratio for their economy.

Sweden? Really? Of all places!
Yup.

What’s a minimum guaranteed income?
If you are an adult, you’ll receive an unconditional income from the state which will allow you to live a very basic life. Much like Canada’s employment insurance system or the welfare systems elsewhere, this will make sure that everyone can purchase the necessities to live. 5

It is a much more simple system and while people are worried it might be gamed or otherwise used in negative ways, such people have taken advantage of systems all over the world, and there isn’t any easy way to reduce such abuse without putting barriers that limit access for everyone.

I really like the idea of a simplified guaranteed minimum income. If you can’t find a job, and need to feed yourself, your country will take care of you.

I should state that I’ve used the employment insurance system in Canada once, for less than two months while I was between jobs. The tech crash in Canada happened just as I was graduating college for Computer Networking. My resume was sitting in piles with engineers from Nortel. It was brutal. It was also a huge pain to get access to the funds from the government as they investigated what seemed like ways to deny my claim.

To give you an idea of how many people in the USA alone need such a system, the United States Census Bureau states that in 2012, the official poverty rate was 15.0 percent. This means that there were 46.5 million people in poverty at that time.

On Reddit, there was a post by imkharn, that discusses a graduated system, and how it would be cheaper for the US than its current 80+ welfare systems. He also discusses a system of graduated amounts based on income, so those with minimum wage jobs, part time jobs or other situations still have guaranteed income that is reduced using a simple formula.

I really enjoyed the idea of this system. The end goal of course is to get people off of using government subsidies to live off of, and I think the graduated system that imkharn came up with would work well for that goal.

What about this maximum income ratio?
It is the idea that the top earners of a company should be limited in pay by some concrete metric. From 1978 to 2012, CEO pay jumped 875%.6

I really like this idea. The Swiss voted on a system that would cap executive pay at twelve times the income of its lowest paid worker. Unfortunately, it didn’t pass, but it drew the attention of forty percent of it’s people, enough that people took notice of the unrest.

The system would have basically meant that if the lowest paid worker makes thirty thousand ($30,000), the CEO can’t earn more than three hundred and sixty thousand ($360,000). While the CEO will still make the same in a single month as their lowest employee will make all year, this isn’t the one hundred to five hundred times difference we are seeing currently in companies around the world.

Many metrics say that Canada currently has a ratio of twenty to one (20:1) when it comes to CEO compensation versus the average worker. Note: that isn’t a comparison against the lowest paid worker like the Swiss were considering.

This kind of law, if it ever comes to pass, will be subverted of course. Companies are going to move their headquarters outside of Sweden, and leave only lower paid employees within their borders. They will find other ways around it through bonus systems, and other payment methods that don’t get included in the calculations. The only way this kind of law would work is if it was applied everywhere, or Sweden said that only those that follow it in an international way can do business in their country. I don’t see either of these coming to pass, so I’m concerned that even if they enact this law, it won’t have any real effect on increasing minimum wages in their country.

I would love to see CEO’s of large corporations increasing minimum wages in their companies so that they could also earn a higher take home wage.

So what’s the solution?
I don’t know what the solution is. I don’t have all of the answers. This is a really complex, worldwide problem. I am excited that some people are starting to try to get laws passed to help the middle class. I’m also very pleased that so many smart people are thinking about this issue. I hope that before I have children that are of working age that many of these issues will be sorted out so that he/she will have opportunities that I didn’t have.

I really just want to see the wage gap shrink, and the middle class be strengthened once again.