Research in Motion is a company that has lost its way. Thinking that it could hold onto their market share because they were business/enterprise focused was dumb, and it took them far too long to realize this. Now there are leaks of their upcoming operating system and hardware, and people probably won’t be too impressed. One thing that did interest me was the leak of the new interface for BBM coming in the next operating system release. 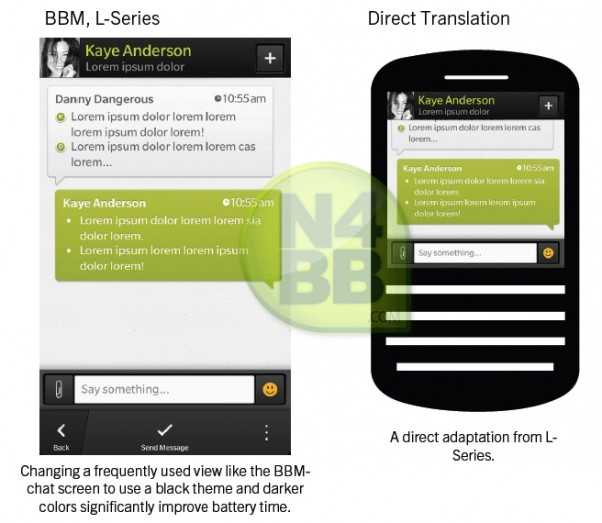 Via MobileSyrup, my choice for Canadian Wireless Cell News, states:

When RIM showed of their new BlackBerry 10 OS at BlackBerry World 2012 they communicated its “flow.” We saw the homescreen, touchscreen QWERTY keyboard and email. One of the major missing pieces was their BlackBerry Messenger service. BBM is essencial to RIM’s offering and they currently have over 59 million subscribers. Today another internal doc has leaked online showing BBM on the L-Series and N-Series devices that indicates RIM will be pushing out themes, which will somewhat give users customization and save on battery life.

Blackberry Messenger is a service that I think they need to port to other devices. BBM is like text messaging without the worry about fees or a texting plan, and many people that I know who own RIM’s devices due to work needs aren’t interested in using normal texting or e-mail for quick day to day conversation. I believe that increasing their install base by expanding their platform beyond just their own devices could serve to benefit the company and its brand.

RIM. as it is today, won’t last another year. Major changes are coming for the company, and most of them won’t be good. In the next three years, the company may be the next Nortel. I hope I’m wrong as I would like to see a Canadian company succeed, but competition is super fierce in the cell market today.