Recently, I wrote a post outlining a game I’d love to make that would be tied to your social media accounts (go read Social Media or Smartphone Battle Game Idea), and I was thinking about how I’d expect everything to work out with regards to character building, and interactions with the game.

Read on for some of those thoughts.

Each character would have a character sheet. This would not be the same as the user profile page. The character sheet is the super hero or villain you would want to represent yourself in the game. 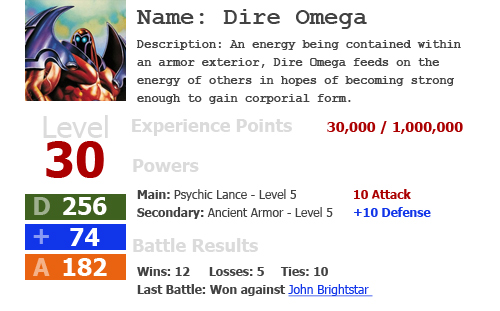 As a new user, you’d get to pick out your character name, or use one of the generators to help you build out a name for your character. Common Marvel and DC character names would be blocked by default unless they either allowed us to use them, or they bought the site.

After you chose your character name, you would get to write your own character bio. The first paragraph of which would be shown by default on your character profile page. People could click through to read your longer bio, where you could also upload fan fiction relating to your character.

You could also put extra facts on your longer bio page, selecting things like height, weight, hair colour, and more. Anything you’d want to add to personalize your character. None of these advanced options would be required though.

You’ll also be able to select an image for your character. You’ll be able to choose from a number of custom created images in the site’s database, upload an image, or use your avatar on Twitter to represent your character.

Also, as you can see from the above character card, information about your current level, which would max out at one hundred and your experience points, which maxes out at one million are displayed for all to see. Beneath your level, you’ll find three boxes, each one associated with a different character stat. The three main character stats would be Defense, Health and Agility.

Initially, when you create a character, you will be given twenty-five points to spend. These points will be to purchase powers, upgrade your three main stats, and buy modifiers.

Upgrading health gives you more life based on the same chart used later to describe power upgrades. Health doesn’t regenerate until the battle is completely over. Defense is how much damage you can take before it reduces your health. Defense regenerates between attacks. Agility refers to dodge chance. Each time someone attacks you with any attack, you are given a chance to dodge.

If you spend five points on Agility, giving you 10 points in agility, then you calculate odds based on attack. So if an enemy attacks with a level 9 attack (50 points) then first, before defense or health we look at agility. So my simple calculation would be something like dodge value over attack value divided by ten. So for the above example it would be 10/50 div 10 = 2% chance to dodge. If you successfully dodge an attack, then you receive no damage.

If you spent nothing on agility, then you’d never dodge any attack and it would go right to your defense and then your life.

For example: If someone attacks you, and it goes into your defense which can absorb 10 damage and their first attack is 2 and their secondary attack is 10, then 2 damage will go through to your health as defense is regenerated per round, not per attack. They could continue to reduce your life by 2 points per round until the battle is complete.

This is why adding on the lower tier powers is so useful and so expensive. It gives you a maximum of five attacks per round which can quickly drain defense. If your secondary powers and lower tier powers are modifiers (non-combat related), then they can’t be used to attack.

Each battle consists of twenty-five rounds which are totally computer controlled once battle has been started.

Winning a battle gives XP, but how much depends on the XP difference between the winner and loser. Posting about the game through the built-in Twitter and Facebook tools can randomly earn you XP, powers or modifier items.

As I continue to consider how detailed and versatile the game system would have to be to keep people interested and coming back as well as easy enough that there isn’t too much of a learning curve, the programming time and knowledge required also goes up. To design, develop, and promote something as complex as this, I would probably be looking at a minimum of five figures ($xx,xxx).

But because of its casual game and social media leanings, I think it could be wildly successful. I also think that bringing a few brands on board, and letting them have their own powers, modifiers, special characters and more could be a great way to monetize the game, as well as let people show how interested they are in specific brands.

At the end of the day, I love coming up with stuff like this, and the image in my head is definitely much more detailed than I’ve been able to write here and I’m still amazed that someone hasn’t done this already. It seems like a natural evolution of Mafia wars style games.