I recently came across a fun idea for a new cell phone concept called Phonebloks and it is something that I don’t think will ever happen. 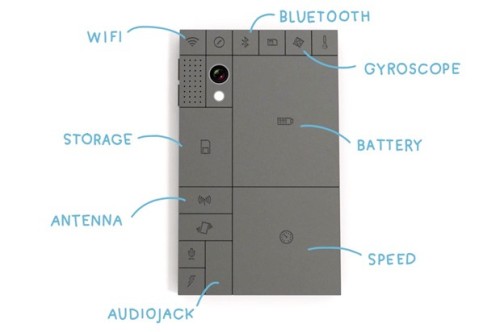 It is basically a cell phone with easy to replace parts. The idea really appeals to me, though I’m not a fan of the demonstration form factor shown below as I’d rather the blocks be contained inside a shell of some sort rather than being exposed.

This is a must watch video if you are interested in cell phones:

With this phone, designed slightly differently, and a flexible operating system, I think it would be a super enjoyable device to have. The idea of creating a personalized phone with less processor speed, and more battery is interesting to me. I would love to see if it would allow me to take out bluetooth, the gyroscope, etc, and and have a bigger and better antenna. I could see people carrying around all kinds of custom configurations that best meet their needs.

Custom cell phones may happen in the next few years, where we, as the consumer, get to decide more than just the colour of the devices we get, but I doubt it’ll look exactly like the Phonebloks platform. If you lost a block, or the connectors weren’t entirely firm, or the different upgrades were too expensive, or the operating system wasn’t flexible enough to deal with certain configurations, you would have a serious dud on your hands and hardware manufacturers won’t take that risk.

But, despite all of the potential drawbacks, difficulties and problems, it is still an exciting idea in my mind.