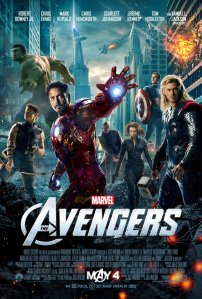 The Avengers – Amazing movie! Way better than I thought it would be. My investment in watching all the other Marvel movies pays off with The Avengers. Everyone gets their moments and the humour shines. I’ve seen it in both 2D and 3D. The 3D wasn’t worth paying the extra money for. I want to go see this again before it is out of the theatres. I really, really, enjoyed it and I give this a 5/5.

The Cabin in the Woods
Because I had seen the trailers, this movie was heavily spoiled for me, and while the intro credits helped give away the twist ending that I was looking for, I still enjoyed this movie. It was strange to know that at the theatres there were two Joss Whedon movies with Chris Hemsworth playing at the same time. I give this a 3.5/5.

Dark Shadows
Tim Burton and Johnny Depp team up again to bring another twisted larger than life movie? Not so much. While the movie was an interesting concept, it felt watered down for a Burton movie, and a little too silly. There were certain plot lines that felt rushed, and others that languished on forever. I had low expectations walking in, and it didn’t meet them. I give this a 2/5.

Battleship
I went and saw this last night, after watching the Totally Rad Show review on the movie. They told me to expect lots of explosions and if that was pretty much all I was looking for, then I would be impressed. To be honest, the explosions were okay, but none felt as powerful as those seen in Transformers 3, and without that intensity the movie fell apart. There wasn’t much suspense, nor were the characters engaging enough to really draw you in. I give this a 1.5/5.