So yesterday, I was feeling super down, and got thinking about photography, the only thing that seems to hold my interest and make me feel better. I decided that I wanted to look on eBay to see what inexpensive things they had that I could add into my kit. My primary goal was to look at camera bags and lenses, but I didn’t end up buying either of those things.

First, I ordered a Canon ES-71 II lens hood for my 50mm f/1.4 lens, as I want to use this lens more through the spring, summer and fall, I noticed that some shots that I took with it last year had really bad lens flares, I’m hoping this hood will reduce this problem for me. The hood will almost make the lens look like it has doubled in length, which I don’t mind either, as the lens looks almost comical due to its short length.

Then I ordered the Canon ET-60 lens hood that is supposed to fit both the 75-300mm and 55-250mm lenses, both of which I own. I decided to buy one lens hood as I’m sure the two lenses can share, and it is rare that I bring both with me at the same time in my current camera bag. There are entire groups on Flickr that rave about the 55-250, and a few people talk highly of placing this hood on it to better shield it from stray light. 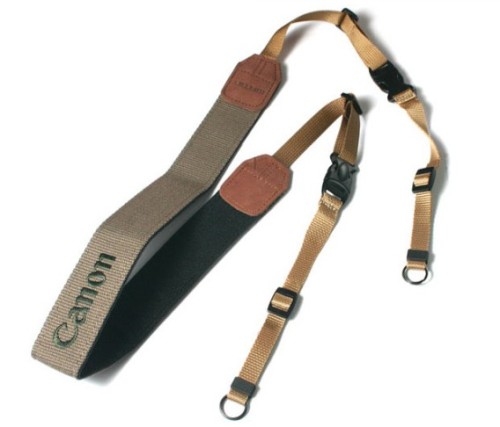 Update: I ended up getting a Black Rapid strap for my birthday, and gave the Matin one to my cousin who uses it and enjoys it. /

The next thing I bought is a Matin neck strap for my camera. The reason I bought it was because I dislike the strap that came default with my camera, but as my load-out gets heavier, I’ll want that extra security. The great thing about the Matin neck strap is that it has quick release buckles so I can easily disconnect the camera from the strap if I need to, unlike the original Canon one, and even better, it has the Canon brand embroidered on the strap, which I think looks nice.

Finally, I decided I would buy a second battery for my camera, and after purchasing it, I quickly went to look at the battery grips. My cousin, Mark, has a grip for his T1i and it definitely makes the camera heavier but also it looks bigger, and balances out larger lenses better. It also gives him a much better battery life for longer photo walks, something that I’ve envied, and so I picked up one for myself as well.

With all these new accessories ordered, I’m pretty excited. I am a bit nervous though as my current bag will now probably only be able to fit the camera with a lens on it, and a single extra lens, rather than the camera, and two or three lenses that I currently truck around, so I still need to get a new bag at some point…